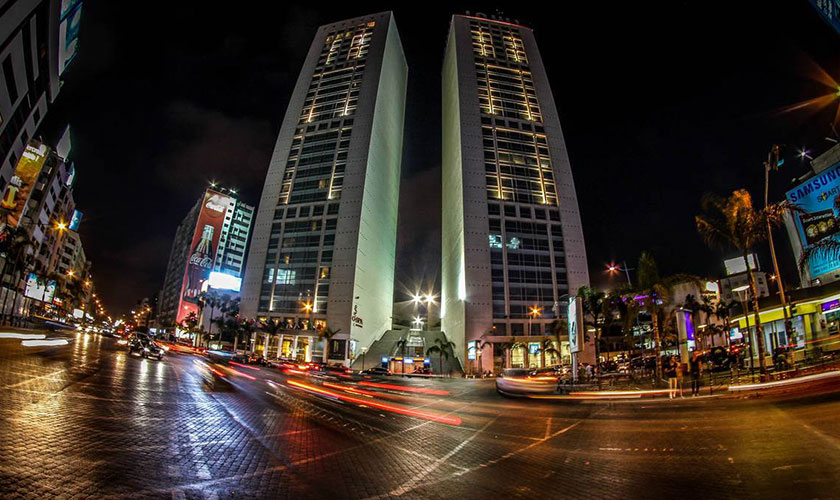 14 Days Imperial Cities Mountains & Desert Sahara start from Casablanca; the biggest city of the country. You would be able go to visit the Great Mosque Hassan II, where you will meet fascinating example of the Moroccan architecture. The largest mosque in the kingdom and the fifth largest mosque in the world. It stands on a promontory looking out on the Atlantic, and has space for 25,000 worshippers. Its minaret is the tallest one in the world at 210 m.

Leaving Casablanca the economic capital of the Morocco, to the political one Rabat. Where we will see the Oudaya Kasbah and its beautiful gardens. This Kasbah of the Oudaya is located at Abou Regreg river.

The Mausoleum of Mohamed V, Hassan II and Hassan Tower which is the minaret of incomplete mosque in Rabat, constructed in 1195 AD. After we finish our sightseeing tour in Rabat, we head to Fez on the express road. Trees and farmlands on the two banks. Arrival to Fez, we check into the hotel for the night.

After visiting the economic capital Casablanca and the political one Rabat, here we go for another adventure through the intellectual capital of Fez which was considered Mecca of the west and Athena of Africa. It is the biggest city of the country after Casablanca with a population of approximately 1 million.

This city is a the former capital and one of the country’s four imperial cities. Fez-Jdid or the new Fes, home of the Mellah the Jewish quarter and the Ville Nouvelle the newest section of Fez created during the French occupation. Fez el Bali is UNESCO World Heritage Site. Its medina is the largest in the world. Among its narrow streets and allies, the oldest university in the world is located; The University of Al-Karaouine, founded in AD 859. This University is still operating nowadays.

On the way to Meknes we will go back on time to 3th century by visiting the most important archaeological site in Morocco Volubilis, which features the best preserved Roman ruins in this part of Northern Africa.

The 45 minutes guided tour is scheduled here.From volubilis we go on our way to Meknes that was named after a Berber tribe which was known as Miknasa in the medieval North African sources. Meknes was the capital of Morocco under the reign of Moulay Ismail (1672–1727). He built in the ingeniously designed granaries, really fascinating architecture of tiny windows, massive walls where he used to store grain and hay to feed his 15.000 horses not food for humans.

This is a long driving day, where we will meet different colors of the kingdom by leaving the old Moroccan city of Meknes. In the way we will pass through the most modern and clean city in the country Ifran. This Berber name of Ifran means caves and it is nicknamed in Morocco as a little Switzerland since it is very green town and is a ski resort in the Middle Atlas region of Morocco because of its high altitude at 1665 meters. Ifran is very known as well by The Brotherhood private university, established in 1997 by The king of Morocco Hassan II and the king of Saudi Arabia Fahd. Where all classes are taught in English, it is an international university.

The landscapes here includes palm tree oases at Jbel Ayachi (at 3747 m) before driving down the curves and join the pre-Saharan zone passing first by Errachidia and Erfoud, which is famous for its pottery and the interesting fossil quarries.

Fossils are a major industry in Erfoud, some 350 million years ago the region around Erfoud is part of the huge ocean. Heading up to the red colored sand sea dunes of Erg Chebbi at Merzouga via Rissani, the hometown of the Alaouist dynasty, where Moulay Ali sheriff started to unify Morocco under his red flag in the beginning of the 17th century. Night and dinner at our hotel.

Throughout the sand dunes we go for a drive on these fabulous landscapes on the edge of the Erg Chebbi, the largest sand dunes in Morocco. We will see plenty of nomadic black tents in the middle of nowhere. Our trip shall stop by a nomadic family to have tea and see what a nonadic life looks like.

Go on our drive and let’s discover the nomadic life of Touareg people by visiting Alkhamliya, a village where nothing has been changed through centuries. Either we lunch here in Alkhamliya village or we go back to our hotel and lunch there. After a nape we go on a camel ride to meet one of the most fascinating sight we will ever seen, the superb sunset in the middle of the high sand dunes of Merzouga. Tonight we stay in Berber tented desert camp and enjoy a wonderful stars view.

Visiting Errisani and the Mausoleum of the founder of the Alaouite Dynasty of Morocco, Moulay Ali Chrif in the 17th century. Up to now Rissani remains a major commercial center in the region, with a large souk, particularly lively today on Tuesdays, Thursdays and Sunday.

Here, the contrasting landscapes remind visitors of the Colorado, with its high plateau, its gorges and great canyons, and its peaks sometimes splintered by erosion. Several peaks in this area exceed 4000 m, with Jbel Saghro 2500 m and Jbel Mgoun at 4068 m being the highest peak in this part of the High Atlas.

From the great canyons of Todgha we go along the road of 1000 kasbahs, since there are enormous Kasbahs on both sides of the road. We pass a town called Boumalen situated on the edge of Dades valley which rises in the High Atlas Mountains, giving life to a huge Berber community by its rich agriculture. Along this valley another valley called valley of roses appearing with the green colors of its Alfalfa plants, olive trees, fig trees and grapes.

This valley gives birth to a rose from which locals produces different cosmetic products like soap, perfumes and skin creams. Locals here celebrate this rose by organizing a national festival eachend of April.

35 km from Ouarzazate there is the fortified city of Aït Benhaddou, built in the 11th century. Once up on a time this Kasbah was the former caravan route between the Sahara and Marrakesh.

Most of the town’s inhabitants now live in a more modern village at the other side of the river; however, around five families are still living within this Kasbah Aït Benhaddou Kasbah has been a UNESCO World Heritage Site since 1987 and several films have been shot there, including Lawrence of Arabia (1962), Time Bandits (1981), The Jewel of the Nile (1985), Kundun (1997), Gladiator (2000) and Alexander (2004).

From this beautiful fortified house we head south west to the town of Taroudant. The ramparts of the town are nearly 6 kilometers long. It has the feel of a small fortified market town on some caravan route. Taroudant contains almost the whole city within its walls.

Under the Saadi Dynasty Taroudant knew its golden age, especially under the reign of Mohammed ash-Sheikh, who constructed the city walls and built the great mosque and its beautiful minaret in 1528. The town became the capital of the Saadians. Taroudant has rich plain and farms of grapes, corn, grain and oranges…ETC.Today the town is a notable marketing town and has a souk near each of its two main squares, Talmoklate. Not that far from Talmaklate square, there is the Arab souk specializes in handicrafts such as pottery, leather, carpets, rugs and jewelry.

Almost 70 km from Taroudant, there is Agadir city. The capital of Berbers since it is the biggest Berber city all over the kingdom. Agadir is also a very modern city that is located on the shore of the Atlantic Ocean, near the foot of the Atlas Mountains. It has the most important fishing and commercial port of Morocco, moreover it is the first sardine port in the world, (exporting cobalt, manganese, zinc and citrus).

Also it is seaside resort with a long sandy beach. Because of its large buildings, wide roads, modern hotels, and European-style cafés, Agadir is not a typical city of traditional Morocco, but it is a modern, busy and dynamic town and very famous for its sea food. Along the ocean we drive for almost 200 km towards Essaouira. On the Atlantic ocean this town waves, with its white painted houses and their blue windows and doors, a well-designed picture. Since the 16th century, Essaouira has also been known by its Portuguese name of Mogador. The Berber name means the wall, a reference to the fortress walls that originally enclosed the city.

In this 14 Days Imperial Cities Mountains & Desert Sahara a one day on your pace will be for sure wonderful, since there is no way to get bored. Due to the plenty activities you will be able to enjoy amazingly as Essaouira is well renowned for its kite surfing and windsurfing, with the powerful trade wind. Horse riding, camel riding along the beach, quad biking are activities that one can enjoy while staying in Essaouira.

It brings artists from all over the world. Although focused on Gnaoua music, it includes rock, jazz and reggae. In the early 1952 the film director and actor Orson Welles made his movie Othello.

Along the half way between Essaouira and Marrakesh you will see enormous Argan tree on both sides of the road. These Argan trees are frequently climbed by goats. Argan oil is produced by several women’s cooperatives and it is used to prepare couscous, salads. Moreover it was traditionally used as a treatment for skin diseases before being founded. As good enough for cosmetics by Europeans manufacturers. Still stop by one of these cooperatives is worthy to see how Berber women. Squeezed the Argan fruits between hands to extract this precious oil. We arrive to our hotel in Marrakesh and if time permit we go out for a walk.

A Full guided tour will be scheduled to discover Marrakesh which is known as the “Red City”. Marrakesh is the most important former imperial city in Morocco’s history. It is situated near the foothills of the snow-capped Atlas Mountain. Like all the old cities, Marrakech comprises both an old fortified city. The Medina and a very modern city called Gueliz built during the French occupation. Marrakesh has the largest traditional market (souk) in Morocco. And also has one of the busiest squares in Africa and the world, Djemaa el Fna. The square is full of story-tellers, water sellers, dancers, snakes charmers and musicians. During the night the square turns into a huge open-air restaurant.

During our visit we will see The Koutoubia Mosque, built in the 12th century in the reign of Almoravid Dynasty. We will go among narrow streets and allies in ancient city.

After the full guided tour, you will be able to discover more on this Red City. Marrakesh by your own as you become familiarized with the alleyways of the medina. You may go on a shopping tour on your own in a local market. And the scattered shops by the Square. The end of 14 Days Imperial Cities Mountains & Desert Sahara.

If the itineraries that, we offer does not match what you’re looking for. Contact us and we will prepare the trip. To your needs and requirements.

THE PRICE depends on the accommodations. 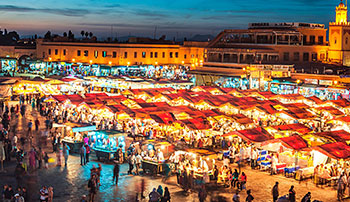 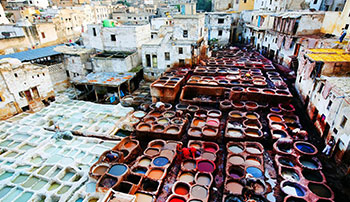 5 Days tours from Fez to Marrakech 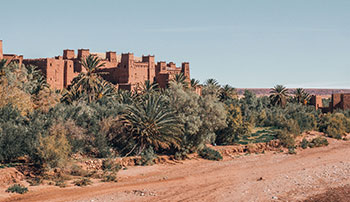 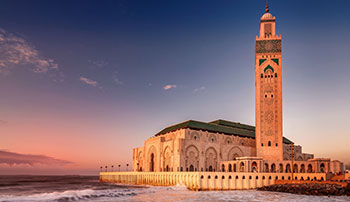